Are you sure you want to delete this?

Give Crystals to Member

Thank you for your request! 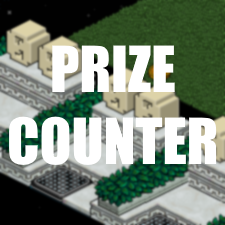 Prize Counter is a luck-based game and usually one of the most generous with prizes. In order to win the game, you must be the last player left. Each round all players will need to step on the banzai teleporter. At random, the banzai will teleport some unlucky players to the lobby and they will be out. As the players teleport, the surviving players will be randomly teleported to an assortment of prizes with hopes of also landing on the largest prize. In most cases, the number of players will be tallied up using number blocks.The players who landed on prizes will continue to the next round. This is repeated until there's only one player left, they are the winner of whichever prize was landed on the most.

The room must have a big game area. There must be an allocated space for both a lobby and the prizes. A simple layout is pictured below. Once the host is ready to begin, they will open the gate or drop the banzai. Players then click the banzai and teleport one by one to different prizes without being teleported out. This is repeated until only one player is left.

*The following is for a total of 6 prizes*